I’ve been an iPhone user since the original iPhone in 2007, and I’m going to be blunt - in my experience, iOS 8 has been the buggiest operating system Apple has ever released. It’s almost hard to believe that we’re now a full year since the release of the first Developer Preview of iOS 8, and I’ve never quite felt that the operating system left that beta phase. On my primary device, an iPhone 6 Plus, I get frequent crashes, user interface layout issues, issues with 3rd party keyboards, bugs with Control Center, and even the occasional wi-fi issue. (So long, discoveryd!) One of my favorite bugs, yet to be addressed, occurs when Apple’s own keyboard just doesn’t launch, requiring a force quit of the affected app. Nothing like pulling down Spotlight and not being able to type.

iOS 9 could have - and to some, should have - been merely a maintenance release. Tim Cook could have stood on stage, put up a “0 new features” slide, and I would have applauded right at my computer screen. But surprisingly, iOS 9 has enough new to warrant the bump in major version number. Having updated to the latest beta build, my iPhone does not feel substantially different, but subtly improved. There’s a new system font - San Francisco - which debuted on the Apple Watch last year and can also now be found on OS X 10.11 El Capitan; there’s the new keyboard, which now displays capital or lowercase letters depending on what you’re about to type. The new Music app is there following its debut on iOS 8.4 earlier this week. The Notes app has been updated with some new functionality, if you care about that sort of thing.

But on the iPad? Well, iOS 9 makes the iPad feel like a whole new device. Split View - currently available only on the iPad Air 2, likely due to RAM and CPU constraints on other models - is very arguably iOS 9’s killer feature. Split View allows you to run two iPad applications side by side, a concept made first mainstream by Windows 8 back in 2012.

This has the potential to improve the iPad user experience in extraordinarily substantial ways. Say you’re playing Hearthstone (my personal new addiction), but your significant other sends you an iMessage wanting to make plans for dinner. With iOS 8, you have two choices - text on your iPhone and continue playing on your iPad, or constantly switching back and forth between Hearthstone and the Messages application. And, of course, if you’ve got a lot going on and your iPad is memory constrained, Hearthstone will inevitably exit costing you a nice big red “loss” on the record books. But now with Split View on an iPad Air 2, you can keep Hearthstone open and dock Messages on the side of the screen, with both working as they should simultaneously.

But because the iPad in my possession is a day one iPad mini 2 (then called the iPad mini with Retina Display - goodness, I don’t miss that ridiculous naming scheme), I have been unable to test Split View. What I can test is its lesser cousin, Slide Over. Slide Over works similarly to Split View in the sense that you can theoretically use a second app without closing your primary application, but the catch here is that second application doesn’t stay “stuck” to the side of the screen, and that process is constantly started and stopped as you open and close the slider over.

Going back to our previous example with Hearthstone and Messages, Hearthstone will take up the entirety of your screen until you need to jump to your conversation. To do that, you swipe left from the right side of the device, which will allow you to select and temporarily open the Messages application. Once open, you can use the Messages app like normal - scroll through the conversation, tap out a reply - all with Hearthstone still open in the background. Once you tap back on Hearthstone, Messages will undock and the process will be terminated. It’s a general usability improvement, sure, but it’s frankly a little confusing for many to understand and has caused issues on my RAM constrained iPad mini 2 where both applications lock up and crash. I fully expect stability to improve in future builds. 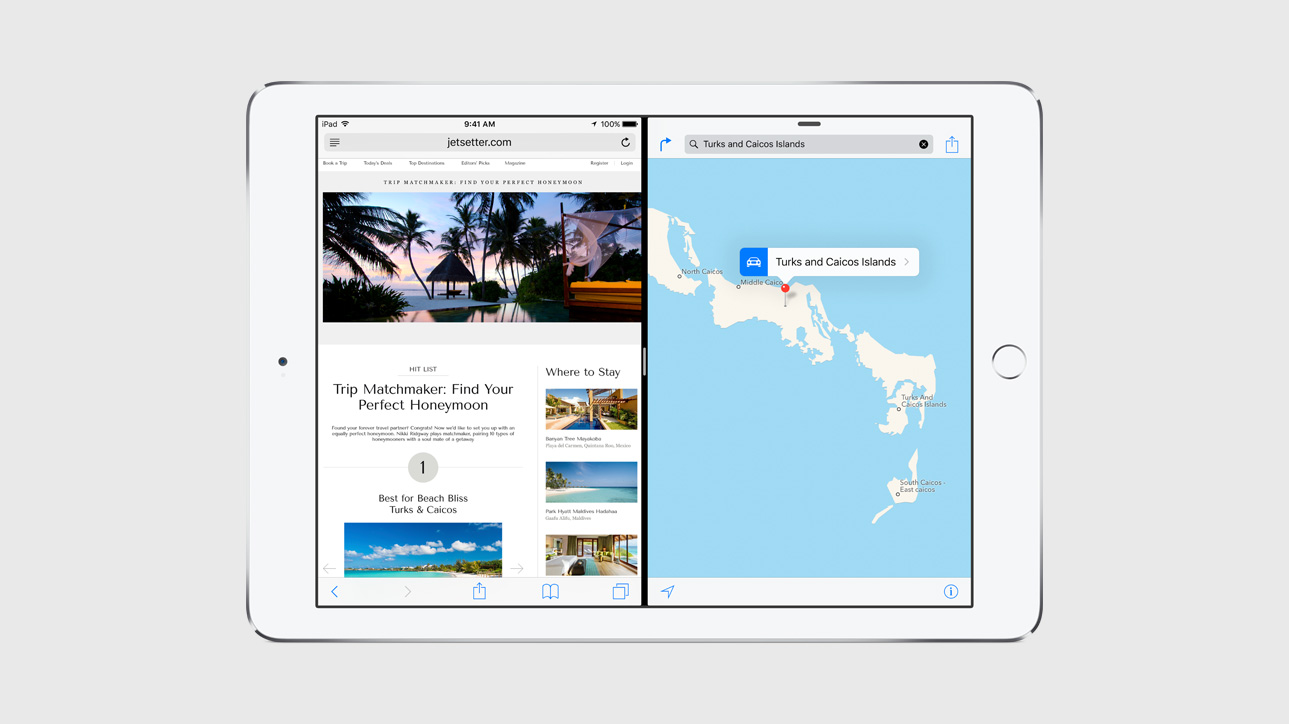 The last major new feature, available both to iPhone and iPad (and the iPod touch) is called Proactive, available on iOS’s newly redesigned Spotlight page. Apple’s much anticipated answer to Google Now. Unfortunately, at this point in development, there’s not too much to write about.

It’s not that Proactive is bad, it just doesn’t really do much. Whilst Google Now is full of useful information at a glance, Proactive is limited to displaying shortcuts ot contacts you might want to talk to, apps you might want to open, places you might want to go to, and news you probably don’t want to read. The issue is that there doesn’t seem to be much underlying context to these suggestions based on location, time of day, or anything of that sort. Suggestions never seem to change for me, suggesting “Fun” locations in the middle of the work day or contacts I feel as though I rarely talk to. The real issue is that Proactive is one of those features that might occasionally come in handy, whilst Google Now is a feature that is consistently excellent.

There is a reason for Proactive’s mediocrity, and it may be the representative of the single biggest difference between Apple and Google - their policies on data collection and how that information gets used. Apple was very clear in their keynote during WWDC that they have no interest in your data, whereas Google’s position is to collect as much about your usage as possible.. The positive to Apple’s position, of course, is superior privacy - Apple doesn’t know what your favorite morning coffee shop is, who you email most, or what your second cousin looks like. The negative is that knowing all of that would make Proactive’s suggestions more like Google’s now - that is to say, way, way, way more useful

iOS 9 is currently available to paying Apple Developers, and a public beta is currently scheduled for “later this Summer.” The final version of iOS 9 will hit your iPhone, iPad, and iPod touch this Autumn.

Next up, watchOS 2, coming soon.